CarryMinati is back with another video trending in India. The video is titled YALGAAR – CARRYMINATI X Wily Frenzy. It is trending with 452k views and 184k likes, as of writing this (May 5 – 11:30 pm).

CarryMinati, aka Ajey Nagar, has been in the headlines for quite some time now amidst the YouTube vs TikTok controversy. He initially released a video to roast Amir Siddiqui, a TikToker, who verbally attacked Carry and other YouTubers for making nonsensical content and perpetuating monotony.

The roast video got removed from his channel stating it was about harassing and cyberbullying the TikToker. What followed next was a series of events that led to TikTok ratings falling down, Faizal Siddiqui TikTok account removed and Amir Siddiqui receiving hatred from all the netizens. 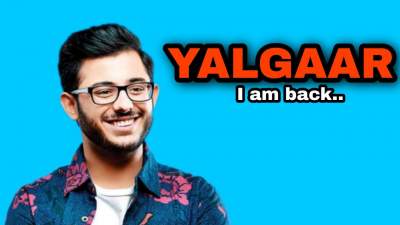 CarryMinati’s latest video titled ‘Yalgaar… Coming Soon’ has gone viral over the social media. In the 1 minute 43 seconds video which starts with a short clip from YouTube vs TikTok: The End video, he shows the records his video had previously broken before the video was deleted from the platform.

He goes on to mention that he had sleepless nights filled with confusions which he could not sort out. And that the time was very tough to move on with the fact that his video has been erased due to some false allegations. He makes the statement, “Carry Boht Jor Se Roast Krta Hai, And Carry Rost Karega”. Close to the end, he tags the the video as ‘Meri Kahani’ & ‘Humari Kahaani’, the story of him and his fans.

You might be thinking, What Does Yalgaar mean? Well it means – to attack.

The video is currently listed as ‘Coming Soon’, so we can expect CarryMinati’s Yalgaar Release Date to be 28th May 2020.

Twitter was soon to release that this video is going to be big and it swarmed with tweets and memes that TikToker’s future is in danger. See for yourself.

Prior to Yalgaar, Carry released a video “Stop Making Assumptions” where he addressed fans, community members and YouTube officials (indirectly) to stop assuming and making false facts out of his dialogues. He seemed angry and unknown as to why his video was taken down by YouTube.

As soon as CarryMinati Yalgaar video releases, he will most definitely achieve the milestone of 20 Million Subscribers. Amit Bhadana has become the first individual YouTuber to cross 20 M subs.