The internet is a source of massive information but everything available is not legit. Specifically, social media is filled with various type of content which doesn’t have a label and could be fake.

The death of George Floyd turned into riots, fire, and damage to the nation because of a video. That video is no doubt real. The conspiracy part started after the citizens came out of their houses for protest.

Some people just want to grab the following by sharing something hateful during the trend.

The Bricks Video Shared by ‘The White House’

There is a shocking tweet made by the official twitter account of ‘The White House’ showing bricks and claiming it to be a set-up for riots initiation. (check: Was George Floyd A Career Criminal?)

But this tweet was soon deleted until it has been viewed more than 1 million times. This video showed a stack of bricks in the streets of various cities. And are being used by protestors which led to violence.

The tweet clearly says that ‘The White House’ has accused Antifa, the anti-fascist group for this domestic terror. However, they didn’t share any evidence for the verification of their claims.

In the early times of this week, BBC’s team has investigated some of these videos and found that these bricks were lying on the streets before the George Floyd protest.

There are a large number of videos that have been watched millions of times and engaged many people. But somebody has compiled the old videos and posted under the name of George Floyd protest and it went viral.

The staged event post has reached a huge portion of the population who use Facebook in their daily lives. (check: Update on Derek Chauvin.)

The Bexar County GOP Chairwoman Cynthia Brehm has posted the same thing which eventually made many prominent Texas republicans resign from their job. Governor Greg Abbott is one of those who resigned.

The Lester also made the things clear on his post shown above by commenting. He says he got two phone calls from the journalist regarding the post. He said he would also ready to resign if Governor Abbott does it.

However, in an interview with CBS19, he said,

I wasn’t there [when Floyd got killed]. I don’t know what went on.

If you want to know more about this theory check out this –> The death of George Floyd was a “staged event.”

First of all look at this picture shared on twitter,

If you don’t know anything about the context of the photo above then anyone can make up a story out of it. In the majority of cases, something negative is expected. (check: Thomas Lane update.)

The same thing happened with this post shared on twitter. The police officer shown in the picture is accused of looting shops and putting trainer boxes in Chicago.

But after the investigation, the Chicago police concluded that these are false claims. The actual case was completely opposite, the policeman in the picture is helping the burglary victim. He is helping to load the victim’s thing in the car.

The shop owner confirmed the incident after watching the photo that the detective actually returning the looted goods. (check: Tou Thao Update.)

The White House Lights Out Theory

Have you ever seen, The White House without any lights?

This is one of the most shared pictures on twitter, Hillary Clinton also shared it. The sole motto behind sharing this photo during the protest is to criticize the leadership of Donald Trump.

However, when investigated, the reports revealed that it is an old photo that was taken in 2014 and it is altered to look like lights are off. (check: J Alexander Kueng Update.)

The altered image also appeared on the spoof news site, News Thump in 2017 showing Donald Trump hiding from the FBI by turning off the lights.

Obviously the purpose of our photoshop wasn’t to mislead, but to complement a joke we were making

Evans also showed his support to Trump’s military warning to the protesters for shutting down the protest. He also claimed that all of these riots are happening just to distract the citizens from the pandemic. 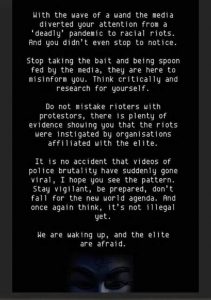 Apart from this post, he also shared a video featuring Trump’s speech in which the President threatened the use of the military for controlling the riots across the nations.

And eventually, his fans were not happy with all of this. Some of his followers write,

I have no respect left for you Pete!

This is a disgrace