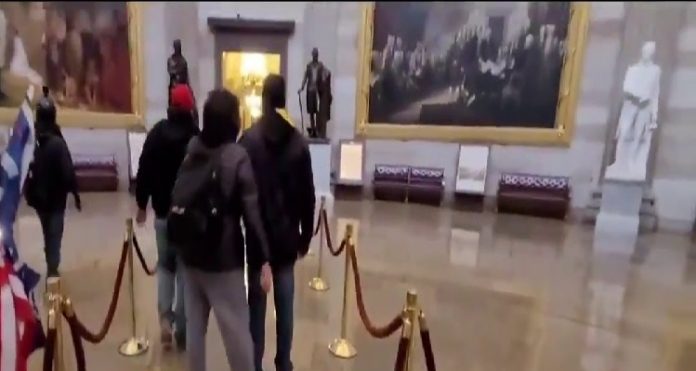 Twitter is flooded with a video of CNN’s Jade Sacker who caught on camera “coordinating with BLM activist, John Sullivan, to lure Trump supporters into the Capitol Building.” The video clearing showing her congratulating him – “We did it!” with a reply, “Is this not gonna be the best film you’ve ever made in yr life?”

Seated w/Sullivan on CNN is Jade Sacker, a photojournalist who followed him into the Capitol to film his exploits as part of a documentary project. Here she’s heard congratulating him – “We did it!” – and he says, “Is this not gonna be the best film you’ve ever made in yr life?” pic.twitter.com/KWLVfgKPA7

John Sullivan, an activist for racial justice caught the shooting of Ashli Babbitt during the U.S. Capitol riots. The police detained him in Utah with the federal charges of interfering with the efforts of police to cool down the riot.

Here is the video of shooting of Ashli Babbitt,

It was all started when the US Congress was certifying Joe Biden for the presidential victory. The Capitol Hill was stormed by the Trump supporters which socked the whole world as the United States is the oldest country practicing democracy.

This story is being developed, till then stay tuned with TheCourierDaily for more news.