Was Nany Green Aunt Jemima Millionaire? How much was Nancy Green worth? Such questions have popped out of nowhere after Aunt Jemima is being retired.

Aunt Jemima, an American syrup and pancakes brand, is being called off the parent company Quaker Oats following years of criticism that the brand’s “mammy” character promoted racial stereotypes.

“As we work to make progress toward racial equality through several initiatives, we also must take a hard look at our portfolio of brands and ensure they reflect our values and meet our consumers’ expectations,” Quaker Oats stated in an interview with CNN.

After the death of multiple African-American people like George Floyd, Rayshard Brooks etc., the nation is swarmed with protests and Black Lives Matter movement. The killing of black people has struck multiple global brands to review the criticism they have been receiving from decades.

Nancy Green was a storyteller, cook, activist, and the first of few African-Americans initially hired to model for Aunt Jemima. The official Aunt Jemima’s website states that the brand was “brought to life” by Nancy Green.

Green was born as a slave on November 17, 1834, near Mount Sterling in Montgomery County, Kentucky. R.T Davis Milling Company hired Nancy Green to portray the “mammy” character for Aunt Jemima.

Aunt Jemima was named after a song when Chris Rutt attended a musical concert in 1889 and heard “Old Aunt Jemima” being played by a Black artist wearing an apron and scarf, according to African American Registry.

The song was allegedly sung by slaves.

What does Aunt Jemima Mean?

According to dictionary.com, Aunt Jemima is any black woman who works for white people as a servant.

Nancy Green Net Worth: Was She A Millionaire?

Nancy Green passed away tragically when a car collided with a truck on a Chicago highway and flipped over on her standing on the sidewalk.

A century after her death, Nancy’s generational worth is $19 Million, according to a Facebook user.

No proofs of Nancy Green being a millionaire are available on the internet.

Did Nancy Get Paid For Aunt Jemima?

Reportedly, NO! She did not get paid for modeling as Aunt Jemima. A lawsuit was filed in 2014 against PepsiCo which stated that Green and Anna S. Harrington, another black woman who was signed by Aunt Jemima Company, were not paid the monetary compensations they were promised.

Harrington’s two great-grandsons sued the company for 3 Billion Dollars in royalties. However, the case was “dismissed with prejudice” as the alleged heirs could not provide concrete evidence. Read about the lawsuit in detail here.

Was Nancy Green The First Black Millionaire? No.

Other companies such as Uncle Ben’s and Mrs. Butterworth’s are also making changes in their products to remove all racial stereotypes. 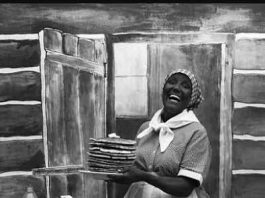