After Wayfair, netizens are accusing Amazon of trafficking children with their highly-priced and not so justified price tags. The e-commerce giant has come under the fire for selling kids in name of the excessively priced household items such as pillow etc. Check out whether Amazon Trafficking Children/Kids Conspiracy theory is true to not.

Wayfair human trafficking scandal theory rose to life after a Reddit user posted screenshots of overly priced goods such as cabinets, pillows, curtains, etc., being sold on the website and linked the names of the items to the missing children in 2020.

The American furniture retailer has denied the allegations in an email sent to Newsweek by a Wayfair’s spokeswoman. She said, “There is, of course, no truth to these claims. The products in question are industrial grade cabinets that are accurately priced.”

The online retailer has since deleted the products which “did not adequately explain the high price point.”

Amazon & Wayfair have fallen in the same pit, and it was inevitable as people began noticing a pattern on the former platform selling a wide variety of products. Is Amazon Child Trafficking Scandal real? Let’s find out.

Wayfair Human Trafficking Conspiracy Theory: People accused Wayfair of kidnapping and selling children disguised behind the heavily priced products, which otherwise cannot not be purchased by normal people unless someone knew what exactly the retailer is selling in place of normal pillows, industrial-grade cabinets, etc. 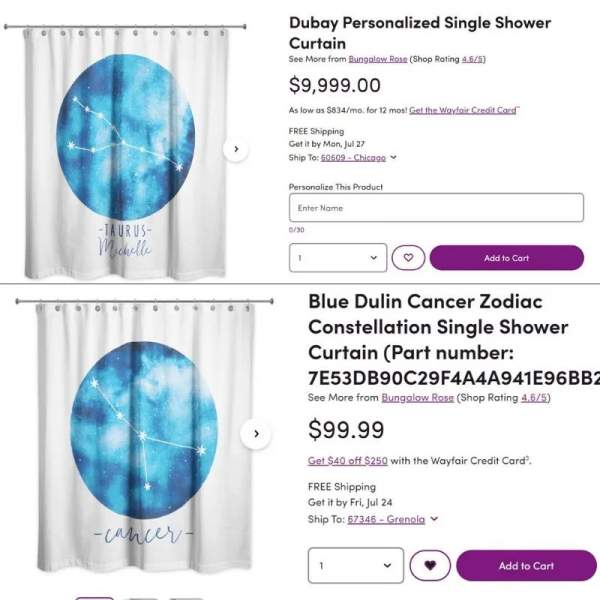 Amazon’s child trafficking conspiracy theory is also similar. The largest e-commerce player in the world is accused of covering its human trafficking front with not-so justified price tags on some of the normal household products.

Amazon is selling area rugs or carpet for $21,000+ dollars, pillows for $10,000+ dollars, drawer table for $16,000+ dollars, etc. Such items have raised suspicion for many curious conspiracy theorists. Take a look at some of the items.

Some people have noticed the reviews posted on such products are cryptically describing a sex trafficking scandal. For example, one reviewer wrote, “I like sticking to be bold and have some attitude,” on the pillow mentioned above. Check out the review below.

One Twitter user noticed that when you typed in the name of a girl missing JiaQi from Singapore. A produced titled “JiaQi Large Office Boss Desk” popped on the list. Take a look below.

The allegations are made on facts that Amazon is selling normal products that should not cost thousands of dollars. Unlike Wayfair, Amazon has not spoken anything about the conspiracy theories coming to life about Amazon Trafficking Kids/Children in the name of highly-priced goods.

We will encourage you to be a little patient and wait for an Amazon official to reply to the matter. However, it is most unlikely that the spokesperson will admit to doing such a deed. But, we shall wait.