The race for the 2022 FIFA World Cup is heating up. The second round threw up another shocking result, as 6/1 underdogs Morocco found a way past Spain at the Education City Stadium. The Atlas Lions’ Spanish-born goalkeeper Bono saved two penalties as Las Rojas were eliminated via a penalty shootout for the third consecutive major tournament.

But while the 2010 champions were sent packing, the Moroccans now have a date with destiny as they will face Portugal in the quarterfinals. They are just the fourth African nation in the history of the tournament to reach the last eight, and if they are to find a way against an imperious-looking Portugal side they will become the first African nation in history to reach the semifinals of a World Cup.

Getting past the Portuguese is no easy feat, however. They were the stars of the round of 16, hitting Switzerland for six as they left their captain and talisman Cristiano Ronaldo on the bench. The winner of that tussle against Morocco will face either England or France, with a place in the December 18th World Cup final on the line.

The matchup between Les Bleus and The Three Lions is arguably the tie of the round. OddsChecker, which compares World Cup odds and offers, has made Didier Deschamps’ side, the reigning world champions, the favorites. That is primarily thanks to the brilliance of Kylian Mbappe.

But many feel that if there is one right back in world football that can contain the Paris Saint-Germain star, it’s England’s Kyle Walker. And with the likes of Jude Bellingham, Phil Foden and Bukayo Saka all hitting form at the perfect time, could it be Gareth Southgate’s men that stun the stars of Russia 2018?

Saturday’s quarterfinal promises to be epic. But before we look ahead to the big clash between the footballing greats, we first look to the past. Here are the last two times the pair faced off.

Back in 2017, England had a team in transition. They were coming off the back of a humiliating exit from the Euro 2016 at the hands of Iceland. But with the core of new manager Gareth Southgate’s team starting to build around the likes of Harry Kane, Raheem Sterling and John Stones, exciting times were surely not too far away.

While the English were still building the team that would lead them to a World Cup semifinal and a European Championship final, the French were primed and ready for action. They had just reached the final of Euro 2016 on home turf the previous year and, with a starting eleven containing the likes of Paul Pogba, N’Golo Kante and an 18-year-old Kylian Mbappé, success looked to be on the horizon. 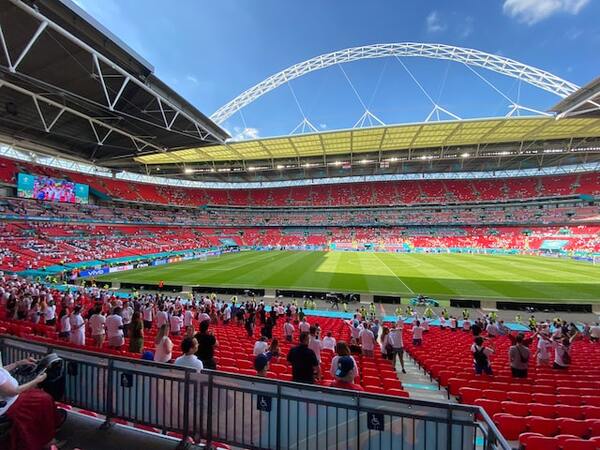 Despite being reduced to ten men following the dismissal of Raphael VaraneIt, it was Les Bleus who were able to flex their muscles on this warm June evening. England led the game early courtesy of captain Harry Kane, but the French would strike twice before the interval to take a halftime lead. Kane would once again equalize from the penalty spot before Ousmane Dembele – who would become a €140m man later that summer – scored the winner 12 minutes from time.

The 2015/16 football season was a strange one, especially in England. Roy Hodgson had just led England to a first group stage exit at the FIFA World Cup since 1958 and somehow managed to keep his job. Chelsea’s defense of their top-flight crown couldn’t have gone any worse under Jose Mourinho, while Pep Guardiola was, surprisingly, struggling during his first season with Manchester City.

Jamie Vardy was on a record-breaking run in the Premier League, with him and his Leicester City teammates in the midst of a season that would shock the footballing world. This friendly match between England and France came just four days prior to the former non-league striker matching Ruud van Nistelrooy’s record of scoring in ten consecutive Premier League games. A week later, he would beat the Dutchman’s record, scoring in a game against Manchester United no less. Perhaps that explains why the 26-time England international was an absentee for this fixture.

On a night when football was most definitely secondary, with the famous Wembley arch lit up in the famous French tricolor, England ran out comfortable 2-0 victors. Goals from Dele Alli – a rasping 25-yard strike that whistled into the top corner – followed by Wayne Rooney were enough to seal the victory. Then Spurs man Alli was the star of the show, however, and it’s a wonder how the talented Englishman never reached the heights he looked set for in late 2015.

The last competitive meeting between the pair of European giants came over a decade ago. England and France squared off in the Donbass Arena in Donetsk, Ukraine in their opening game of the 2012 European Championships.

If the meeting between the two at the 2022 FIFA World Cup is stacked with talent, the meeting ten years ago was anything but. England’s team contained the likes of Joe Hart, Glen Johnson, Joleon Lescott and Danny Welbeck, a far cry from the wealth of riches Gareth Southgate has at his disposal today. And the French weren’t much better.

Back then, their star men were Franck Ribery, Samir Nasri, and Karim Benzema. On paper, that sounds brilliant, but their supporting cast was anything but. Three-quarters of the defense was made up of Mathieu Debuchy, Adil Rami and Philippe Mexes, with former Portsmouth midfielder Lassana Diarra anchoring just in front.

Once it got underway, the match was a drab affair. Lescott gave England the lead on the half-hour mark when he nodded home from a Steven Gerrard corner before the dangerous Nasri equalized barely nine minutes later. The second half fizzled out and, unsurprisingly, neither side made it past the second round of the competition.

Saturday’s match between England and France is set to be much more exciting, with top talent on both teams. England are a different team now and one to watch in the World Cup. This should be an exciting clash.