Diya Aur Baati Hum 25th April 2016: Om wore a gold ring to Emily. Babasa announced that they would play a game with husband-wife couples and whoever would win the game would get the prize. He said in this game, husbands would lift their wives and race to each others.

Vikram went for Meenakshi. Emily said to Om to come for this. Om said he did not like it and he would not do this. Emily said to him that he should do it for her happiness. Om became agree. Everyone became ready, Babasa said one. then everyone lifts their wives but Vikram was unable to lift Meenakshi.

Bhabho said to him try fast to lift Meenakshi. Babasa said three. Everyone went and started the race. Sooraj and Sandhya won the race. All ladies praised for Sandhya and Sooraj.  Vikram said Sandhya was light in weight but Meenakshi had 200 kg weight.

They all laughed and asked Sooraj about the secret of his victory. Sooraj said he would tell everyone the secret. He said he imagined that he was going to drop Sandhya in her Maayka so he went fast and won the race. Sandhya became sad to hear this.

Next morning, Babasa asked Bhabho for tea but Bhabho was not at home. Vikram asked Meenakshi but she was also missing. Sooraj found that Sandhya and Arzoo were also missing from the house.

They all got worried for them. Sandhya made a video call to them. Bhabho said they had gone anywhere today, it’s women day out today. Sandhya said to Sooraj that they are free today and they would enjoy alone.

Sooraj said he would talk to Sandhya but Babasa stopped him said they were free today and they would do enjoy at home freely. Bhabho said to Sandhya, Meenakshi and Arzoo that they would tell them their value. They all joined the hands and Bhabho said till Babasa would convince her she would not go back to home.

Vikram said to Babasa to convince Bhabho and take back them all in the home. Babasa said no, they would not bend today. He said he had known their plan but he would not go. They all joined their hands.

Sandhya, Bhabho, Meenakshi, and Arzoo were enjoying on the beach. Bhabho bought a jacket for Babasa. Meenakshi said she would buy sugarcane packet for Vikram. Sandhya made a mehndi design on her hand with the name of Sooraj.

Will all wives win the challenge from their husbands? 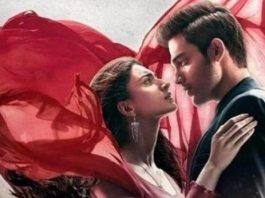