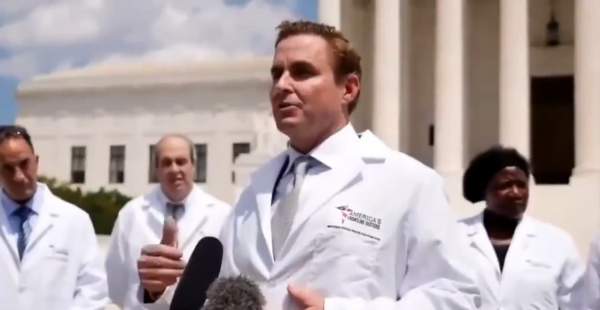 Dr. Dan Erickson, the owner of Accelerated Urgent Care also appeared in the viral video of America’s Frontline Doctors in front of Washington, DC. But the viral video has been removed from every platform like YouTube, Twitter, and Facebook.

The social media giants are saying that this video is violating their “Terms of Service” as the content features misleading information about the COVID-19 pandemic. Erickson said in the video that “Lockdown causes public health issues, suicide hotline are up 600%, different areas on alcoholism are all on the rise.”

The more you look the more you see there is an absolute agenda of the 1% that has the objective of trying to control everybody and everything. Anything that deviates from their evil objective must be suppressed, censored and banned.

“Lockdown does have a financial consequence but health issues also,” he added. He said that “we need to take a sustainable and measured approach.”

Back on May 1, 2020, Washington Post posted a video on YouTube after the video featuring Dan Erickson and Artin Massiihi taken down.

After the video has been taken down, Erickson said, “When we did our initial press conference it went to about 5 million and then they’d had enough, so they pulled it down and it went to Bitchute…. But it got shared so many times they were having trouble, because people had recorded it on all kinds of devices and were re-sharing.”

“Sometimes when they take it down, that negative attention causes a lot of positive movement … It got shared all over the place.”

“To Facebook’s credit, they left it on there, but YouTube said no.”

“I almost think that the censorship caused an increased spread, because all different countries, heads of state were calling, wondering why we were taken down, and very interested in the topic at that point.”

Dr. Dan Erickson also said that after doing the basic calculations out of 39.5 million people only 4.7 million cases in California. With this 1,227 lost their lives and equating it calculated that the chances of dying from COVID-19 are only 0.03.

He also said that there is spreading of the unnecessary fear among masses by considering the rising number of coronavirus cases.

Therefore, according to him, people should look at the number of people hospitalized and deaths. Not on the total number of infected cases.