During the tough times of coronavirus pandemic, some people have started their jobs as usual. But still, there are many people who are still under lockdown and it seems like they have nothing serious to do.

So they are just watching TV shows and movies for timepass. There is a popular animated Indian tv show, ‘Chota Bheem’ in which the lead character Bheem has decided to marry to Rajkumari Indumati, princess of Dholakpur.

The creators of Chhota Bheem, Green Gold Animation has made the news clear about the show. The news spread a lot in the whole nation about the marriage of lead character, Bheem.

Here is the official confirmation from the makers, 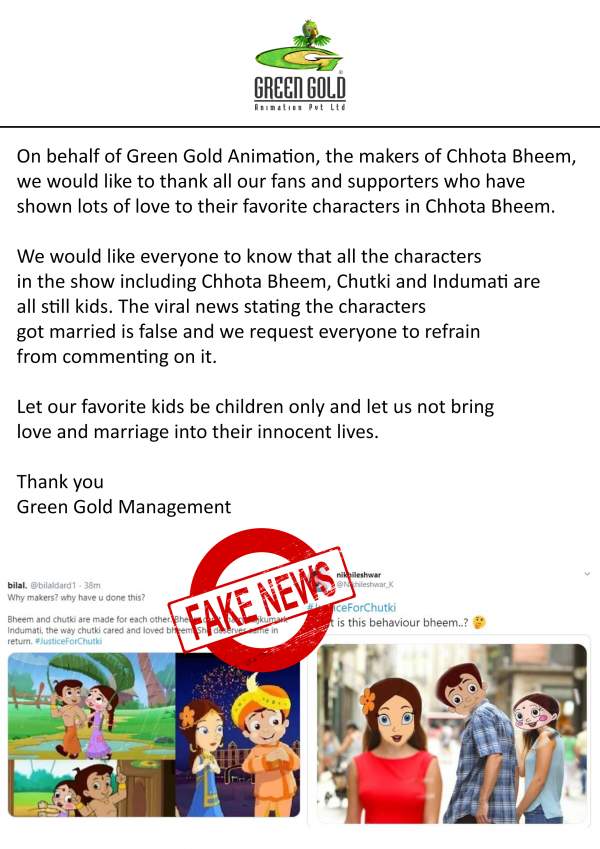 But fans are saying that Chutki and Bheem are made for each other. So, they just started tweeting about the show on twitter.

And somehow, a new trend has come up on social media with more than 15,000 tweets in just a short span of time.

Here are some tweets showing the same,

#JusticeForChutki now who do this it was so funny 🤣🤣🤣🤣 pic.twitter.com/vgvAcG7v4S

As soon as this #JusticeForChutki trends on twitter, the meme-makers have jumped into the game for trolling the trend.

#JusticeForChutki is trending at the top..😂😭

Man I hated chhota Bheem from the very start , I knew he was a player , a true fuckboi !
Chose Indumati over Chutki …
He abandoned chutki , he didn’t even cared about her feelings , her ladoos #JusticeForChutki pic.twitter.com/v4uEMDZMAZ

There are numerous tweets available on the social network which clearly shows how anything can become a trend nowadays.

People have that much of free time that they are also filling petition on change.org to support the fictional character of Chutki.

While in the United States, the whole nation is protesting for the justice of George Floyd. The citizens of the US have started Black Lives Matters Movement to bring some change.

The racism hasn’t ended yet, this racist thing is still alive in the minds of people in power. The Americans and the Africans are altogether spreading the message.

In Africa, people have started boycotting US-based products because of the things that are going on with the black community in the US.

There is so much going in the whole world, this 2020 has started with the corona thing, and now, the cyclone is on its way to hit Mumbai in India.

Does the justice for Chutki really bring the change in the world? People really don’t care about anything which is going on in the world. They are just happy on their own.