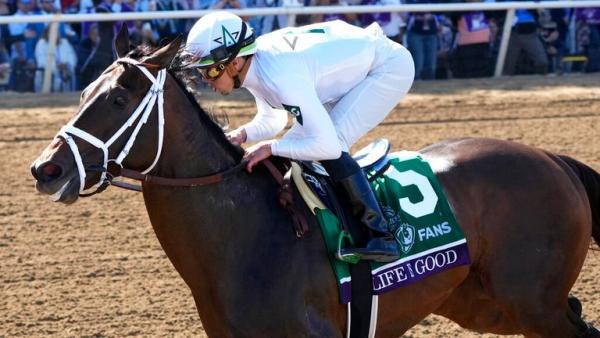 Pegasus World Cup winner Life Is Good was expected to add another major prize to his career in the Dubai World Cup at Meydan Racecourse in the UAE. However, the US-trained horse failed in his bid, as he had to settle for fourth place.

Todd Pletcher’s runner was clear of his rivals with just over two furlongs to go at Meydan, but the distance caught him out as he struggled to see out the 1m2f trip. It was the first time the horse had run over that trip before and it ended up being too much of a stretch for him.

It was another US-trained horse who landed the first prize in the feature race of the Dubai World Cup Carnival. Country Grammer came out on top under the hands of 51-year-old jockey Frankie Dettori.

Despite the defeat, Life Is Good is likely to be among the racing tips for all the leading dirt races in the USA in 2022, including the Breeders’ Cup Classic where he is the +600 favorite. The two-time Grade One winner could meet Country Grammer at the Breeders’ Cup meeting, which would give him the chance to reverse the form with his rival.

Life Is Good Proved How Dominant He Can Be at Gulfstream

Prior to his trip to the UAE, Life Is Good prevailed in the Pegasus World Cup at Gulfstream Park where he defeated 2021 Breeders’ Cup Classic winner Knicks Go. He led the field from leaving the gates to crossing the finish line.

That victory ensured the colt enhanced his reputation as one of the best dirt horses in the world. He had a brilliant three-year-old campaign, with wins coming in the Kelso Handicap and Breeders’ Cup Dirt Mile. His success in Florida showed he had improved further in 2022.

Life Is Good had no problem with the 1m1f distance at Gulfstream Park. He finished the contest strongly which meant he was unchallenged in the closing stages of that race. His early pace was something not many expected. It prevented Knicks Go from taking a soft lead like he had done so often before in his success on the track.

Although defeat at Meydan means the horse now moves to a record of 5-7, he loses little in defeat. Connections opted to take a chance on a new continent, and had the race been over 1m or 1m1f, he would have beaten a strong international field by some distance.

Whitney Stakes Likely to Be Among Targets Before Breeders’ Cup

The Whitney Stakes at Saratoga in August is one possibility. Knicks Go won the Grade One contest over 1m in 2021. Life Is Good did feature at the New York-based racecourse last year as he finished second in the H. Allen Jerkens Memorial Stakes behind Jackie’s Warrior. He led for the majority of that race but just got caught with 100 yards to go.

Belmont Park offers a number of options for Pletcher’s talented runner. Connections may choose to try and defend their crown in the Grade Two Kelso Handicap. He won that race by just over five lengths last September. There is also the Hill ‘N’ Dale Metropolitan Handicap at the same track in June.

Although defeat at Meydan was unexpected, there will likely be lots of opportunities for this horse to do enough to end the year as the highest-rated dirt horse in the world.