Nicki Minaj has come in between the drama that was brewing between the celebrity hair top wig stylists Tae and Jonathan aka J Wright.

If you have been in the celeb and gossips world, then you must be aware of Arrogant Tae. He is at the top hairstylist in the industry. He came into the spotlight after working with Ari Fletcher, Dream Doll, and the mastermind who brought Nicki from horrific wigs to lace front glory.

Then comes Jonathan as the next big wigologist. Recently, he came into the news after working with Tekashi 69 and the young woman who was assaulted in Ohio salon Iconic Stylez.

It has been just a few days when Jonathan copied the style of Tae. Wright put a floor-length ombre pink wig on cosmetic guru Jeffree Star. It seemed inspired from a wig that Tae put on Dream Doll.

Fans can compare the two wig styles the best. It’s on you to compare and have a debate in the comments section below. Let’s know who did it better.

Today, Nicki Minaj posted the first visuals for a verse on A$AP Ferg’s new song Move Ya Hips. Tae has been her hairstylist for a long time now. But, instead of crediting him, she credited Jonathan for new looks. It left fans speculating what happened to Tae. Has she dropped off Tae?

Nicki’s ridged bangs raised everyone’s eyebrows. She shared the reason on social media why she employed Jonathan to do her hair for the visuals. Minaj shared that Tae had canceled her appointment just 48 hours before the time. She had to go to the set to film the promo video.

Nicki speaks on the situation with her hairstylist

However, Tae has denied her claims. He said that he already had an appointment fixed to get his wisdom tooth pulled. He also added that he didn’t have any information regarding a wig for Nicki.

I never said no bt I know how she is with the wigs she like , the company she uses have not been texting me back when I asked them to send me 3 blonde wigs that I can color n have on hand for her bt I got no response bt if I would of got a wig from else where I would of got cursed I it cause she knows the difference! I really wanted to be there cause I always try n make sure that I’m there for her bt I had to handle my business n get my tooth pulled because I been holding it off wayyyy before corona n I couldn’t cause of corona n now that businesses are back opened I went n got it Over with!!! N it’s not about being spoiled bt u don’t go against me with ppl who sit n shade me n feel a way about me! Bt Watever it’s life

Jonathan seemed to have enjoyed the feud by adding his subtle comments on Tae’s alleged unprofessionalism. 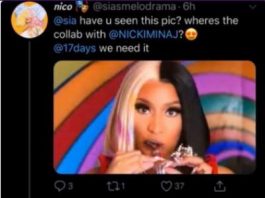 Sia Apologizes To Cardi B & Nicki Minaj on Twitter for...