George P. Bush has got attention these days as he plans to support Donald Trump in the upcoming elections of 2020.

This is something publically rare thing as someone from the Bush’s political family is showing support months ahead of the elections.

He made the statement in support of Trump to Dallas Morning News to remove the tensions between the Bush Family and Donald Trump.

Who is George P. Bush?

George Prescott Bush is a 44-year-old corporate lawyer who also worked as a U.S.Navy Reserve officer in Afghanistan. He also ran a real estate equity firm and is the Commissioner of the Texas General Land Office.

Apart from what he does, he is the son of former Florida Governor Jeb Bush who was unsuccessful against Trump in 2016 to be Republican presidential candidate.

He is the nephew of George W. Bush, 43rd President of the United States. He is named after 41st President George H.W. Bush (his grandfather).

He lives with his wife Amanda and their two children in Austin, Texas.

As it is written on his website that he “works to safeguard our Texas coastline as well as ensure Texas veterans receive the benefits they’ve earned.” 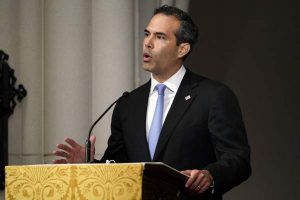 What does Trump say about him?

Well, he united the Texas Republican activists to go for Trump. He has done this to defeat Hillary Clinton setting aside his father’s unsuccessful election campaigns.

As per a video by CNN Bush said, “From Team Bush, it’s a bitter pill to swallow but you know what? You get back up and you help the man that won, and you make sure that we stop Hillary Clinton.”

This made Trump bring up Bush on stage at an April 2019 rally introducing as “the only Bush who got it right.”

Why he plans to vote Donald Trump in 2020 elections

Bush said to The Dallas Morning and The Texas Tribune, “Trump is the only thing standing between America and socialism.”

He also pointed out that even during the COVID-19 pandemic, the economy of the nation hasn’t affected much and returning back. He also added, “It’s clear, America and Texas will continue to be stronger than ever.”

After his statement, Freddy Ford, the former president’s spokesman called it “completely made up.”

Ford said, “President Bush is retired from presidential politics and has not indicated how he will vote.”

Specifically, his net worth is not known but as per some sources, the net worth of the Bush family is available.

While at the time of the death of Barbara and George H.W. Bush, It is reported to have a net worth of $25 million each as per the article on townandcountrymag.com.

According to Thoughtco.com, at the time of leaving the office, Jeb Bush got $28 million.

Note: The story is being developed. So, stay tuned with TheCourierDaily TCD! for more news.