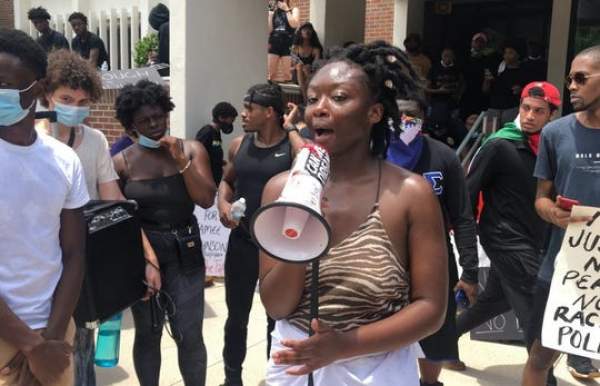 Oluwatoyin Salau is a 19-year-old Black Lives Matter Protester from Tallahasse, Floride who was missing. And last seen on June 6 near Wahnish Way and Orange Avenue, according to the Tallahassee Police Department.

On June 7, 2020, she revealed on Twitter that she was molested by a black man on Richview and Park Ave. She also said that the man came to her like God who offered a ride and help to find someplace to sleep.

He came disguised as a man of God and ended up picking me up from nearby Saxon Street. I entered his truck only because I carry anything to defend myself not even a phone (which is currently at the church) and I have poor vision. I trusted the holy spirit to keep me safe.

Who is Oluwatoyin Salau?

Oluwatoyin Salau was a 19-year-old a major speaker for the Black Lives Matter protest which is going on since the death of George Floyd on May 25, 2020.

She has been missing since she tweeted some disturbing tweets. Now, after several days of missing, her body was found recently by the roadside.

Her death has been confirmed by one close family friend, “I’m sorry to inform everyone about this but Toyin is no longer with us.”

The same woman who said the statement above also shared on twitter on June 11, “She’s been missing since last Friday since she left me and my friends. Last time she was last sighted was at the BL Perry Library on Saturday then after that, we haven’t seen her. If you know any info please contact me because I’m helping her mom. She’s somewhere on the south side.”

The Saturday night of June 13, the Tallahassee Police Department found two dead bodies. Salau’s close friend identified that one of the body is of Oluwatoyin.

Also, the police got the suspect whose name is Aaron Glee Jr., 49 years old. While the other dead body is of Victoria Sims, 75 years old reported who was also reported to be missing.

The retired state worker, Victoria was among well-known volunteers and also known for her work in local Democratic politics according to USA Today.

Instead of justice, the protesters are facing new issues every day, but they are still united for a good cause in the streets as well as on social media networks.

Here is one tweet which says, “Rest in power Ouwatoyin. We will not let b****rds win,”

Black women are the canaries in the coal mine. Unprotected and neglected. Ouwatoyin “Toyin” Salau was only 19 years old and had so much light left to give to this ever darkening world. Rest in power Ouwatoyin. We will not let bastards win. #JusticeForOluwatoyinSalau pic.twitter.com/ealk7YakZf

Are there any more deaths after the Black Lives Matter movement started?

Many people across America lost their lives, some were among the protesters and others were not known whether they were in link with the protest or not. But they were African-American.

Starting from George Floyd, Robert Fuller and Rayshard Brooks are no more.

How to donate for Oluwatoyin Salau?

Well, her friend started the fundraiser program on GoFundMe which over the periods of time crossed $10k. But as of now, the portal says, “The organizer has currently disabled new donations to this fundraiser.”