Back in 1998, the United States Men’s National Team (USMNT) finished on a fat zero at the  FIFA World Cup in France.  Fittingly, it took their female counterparts to stop the States’ badly-tarnished reputation in the soccer world, leading the nation to a new era of purpose and endeavor on the pitch, and accelerating existing efforts to give women deserved equality in their life’s calling.

After winning the World Cup for the fourth time in 2019, the USWNT is a trailblazer for soccer in America.

A land fit for heroes?

These days, Americans who seek the latest prices in US-legal betting markets have the opportunity to back homegrown heroes in a variety of competitions. For instance, the likes of Christian Pulisic and Weston McKennie play in the world-renowned UEFA Champions League, and the genesis of their greatness is founded in the turbulent 1990s for American soccer.

The first half of that decade saw the continual stunting of the USMNT’s intended growth, due mainly to the cessation of the NASL years prior, and the absence of the commercial power that today’s MLS franchise now commands. The presence of the ASPL was insignificant, and this grey period culminated in a US-hosted 1994 World Cup that failed to make the global impact anticipated.

This was made all the more inexplicable by the women’s national team’s contrastingly bright performances on the global stage by that point. They had enjoyed a perfect run in the inaugural World Cup back in 1991 but would lose their crown to Norway four years later, finishing third. By 1999, the field had become more competitive than ever, and with the USWNT having home advantage, it was time to right the wrongs of preceding years. 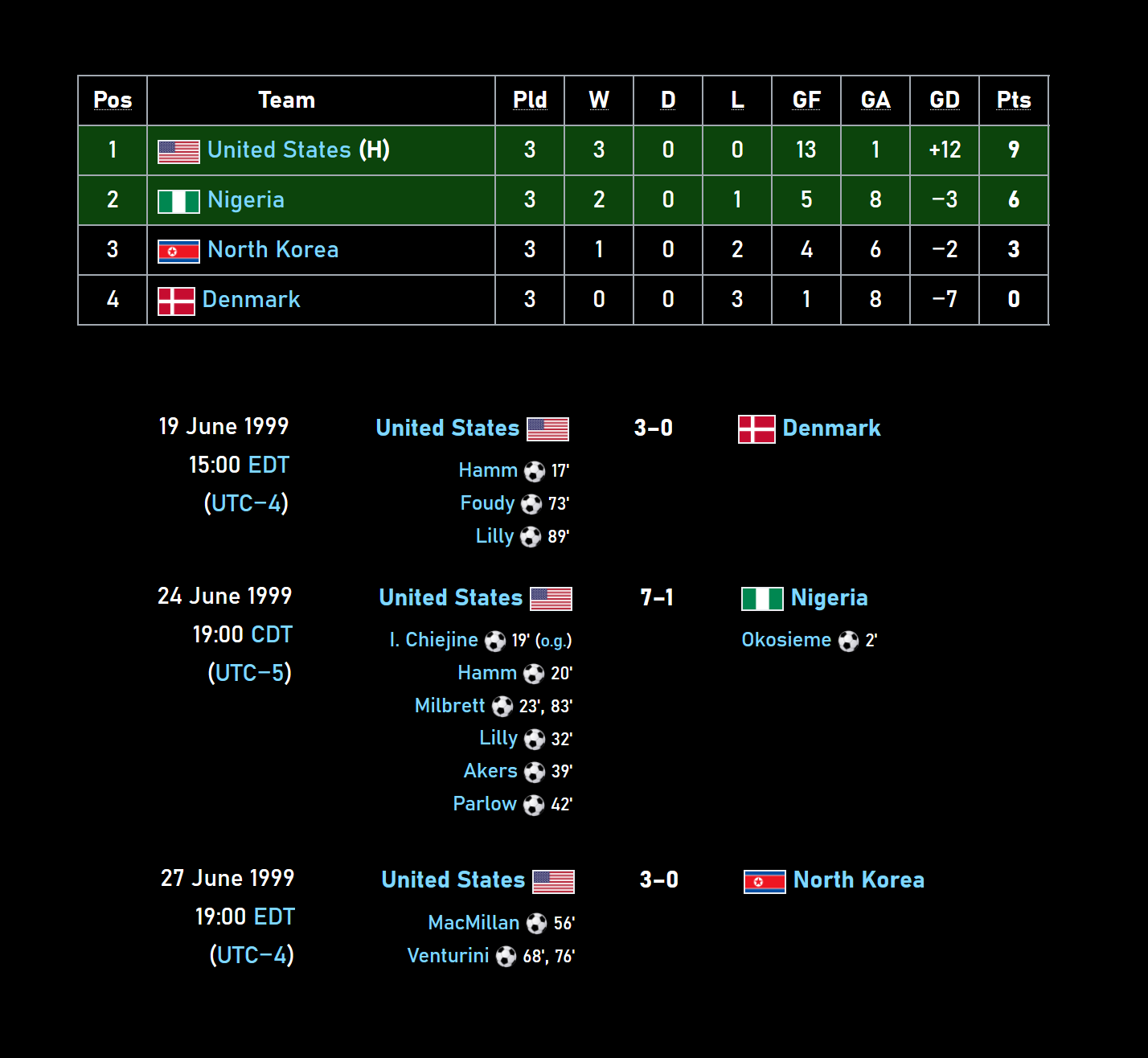 While the United States could have drawn a far tougher group at 1999 World Cup, the core personnel needed had to be on form.

Leading the team’s engine, defender Carla Overbeck was one of the most experienced and battle-hardened captains around, having been a part of the cup-winning squad in 1991. Simply put, her specialty was being the best, with the foundations of success taking the form of a perfect return of four college championships – from Freshman to Senior year – with the North Carolina Tar Heels.

Were it not for her efforts amongst those of many others, it would not be unreasonable to think that many female athletes of today, such as outspoken WNBA star Charmita Daniels, would find it a lot more difficult being heard. Of course, no team is bigger than one captain, and neither has a team ever won major honors without a reliable strikeforce upfront.

In Mia Hamm and Kristine Lilly, the USWNT had a partnership that truly clicked.

Both Hamm and Lilly scored in the first two group games, which both yielded wins by a margin of 3+ goals. With both women also able to play in midfield, their positional versatility gave the USWNT a true element of surprise. So too did Tisha Venturini, an outright midfielder who roamed at opportune moments and bagged herself a brace against North Korea. 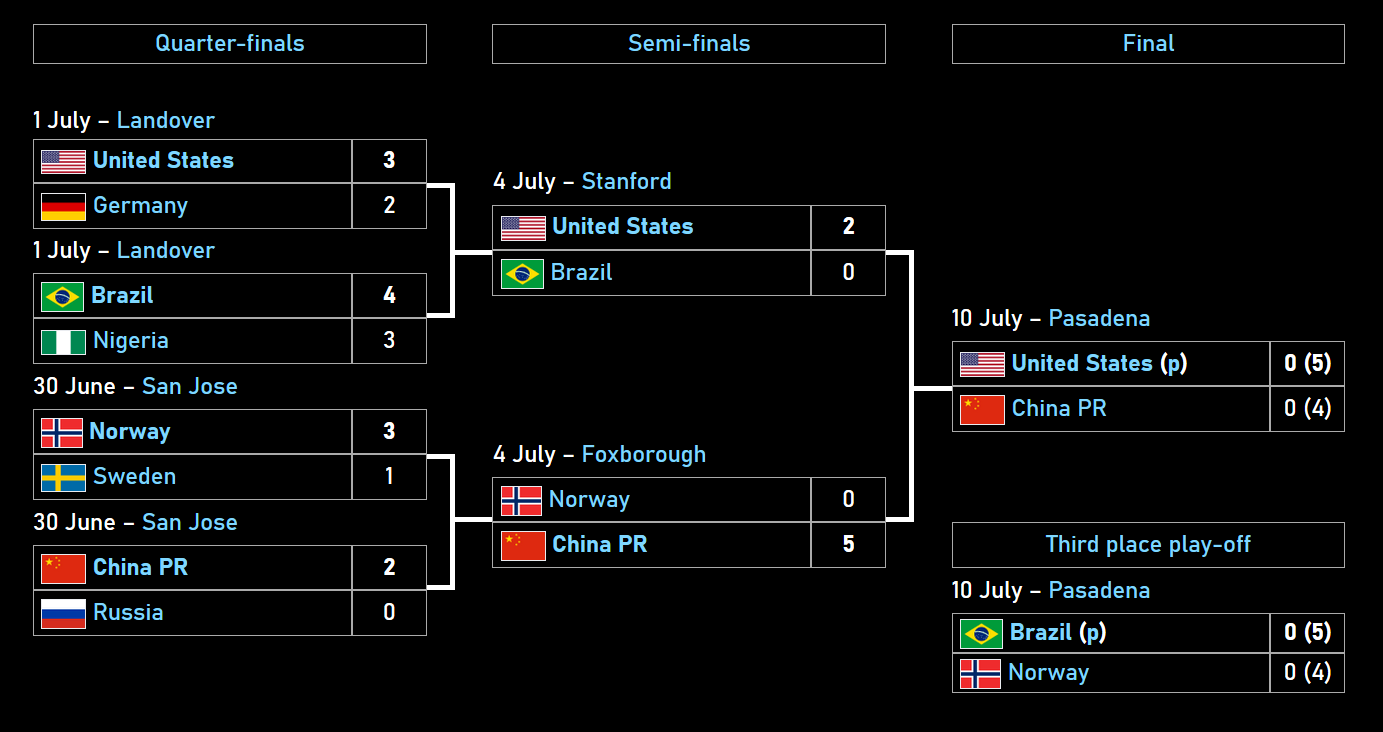 The knockout phase of the 1999 World Cup.

The knockouts – and the aftermath

It was in the knockout stage that the USWNT truly rose to the challenge, firstly taking on a strong German side that stood as a popular pre-tournament a frontrunner in the outright stakes. Fittingly, it was a close match settled by the odd goal in five, and most memorable for the sight of Brandi Chastain scoring at both ends. Firstly, she netted a fifth-minute own-goal but atoned for that error with a second-half equalizer, as the US turned around a 2-1 half-time deficit.

Brazil also posed a stern test in the semi-finals and gave the US a very uneasy time after the hosts had taken a fifth-minute lead. The eventual 2-0 the scoreline did not tell the full story of the steely nerve required from the US, but they showed that nerve to the fullest extent in the final. China lay in wait, having demolished the champions Norway 5-0 in the other semi-final. After 120 goalless minutes, it was time for the dreaded penalty shootout.

Brave to a fault, Overbeck scored the opening penalty to settle the nerves, and after a miss from China’s Liu Ying, it was down to Chastain to net the decisive penalty. She did just that, and history was made. While it was just one rung on American soccer’s ladder to redemption, the second World Cup win undoubtedly added fuel to the growing desire for the USMNT to learn from the mistakes of the past.

By 2002, with a now-maturing MLS franchise fulfilling its purpose, the USMNT were celebrating what remains their best FIFA World Cup performance to date. They reached the quarter-finals with a courageous style of play, which bore striking similarities to the one employed by the USWNT over the previous decade.

With the men’s team choosing the first Asian-held World Cup to flourish so brilliantly, they gave a world superpower a long-overdue transformation of identity in the world’s most popular sport – and finished what their female counterparts had begun years prior.