The hacktivist group Anonymous has made a fabulous comeback by exposing Donald Trump, Naomi Campbell, and Jeffery Epstein for rackets involving human trafficking and child abuse. Twitter flooded with Anonymous Donald Trump memes, meanwhile, netizens are asking for more revelations of the US President deeds.

The top-tier hacking organization maintained silence for more than 3 years but it has returned to expose the truth of politicians and film stars. Their involvement in inhumane activities and to reveal their darkest truths.

Anonymous posted a video on their official FB page on 31st May where the popular masked narrator describes the faulty system of Minneapolis Police Department (MPD). Speaking of George Floyd, who was recently murdered by an (ex) Police Officer Derek Chauvin, the narrator added clips of similar conduct from the past when police had behaved brutally with unarmed citizens.

Citing the murder of Floyd as, “just the tip of the iceberg”. The hacker group said, “MPD is among the worst and has a horrible track record of violence and corruption”. While natives are protesting against the brutality of the state police, their unregulated behavior toward the unarmed black man and the liability of United States Jurisdiction.

The death of a 46-year old black man has sparked rage among the entire country. All the states, Los Angeles, New York, California, Kansas, etc are mourning the murder. Some people took a violent path, they are burning down shopping complexes, boutiques, and looting the stores. You can read it in detail below.

Read: Death of George Floyd & Its Consequences in Details

It is just a small part of what Anonymous has revealed worldwide as they have exposed the acclaimed politicians, celebrities and activists with the likes of Jeffrey Epstein, Princess Diana’s Death, Bill Gates, Naomi Campbell, and a plethora more. Netizens shared it on social media, Anonymous Trump Documents & Memes also resurfaced. 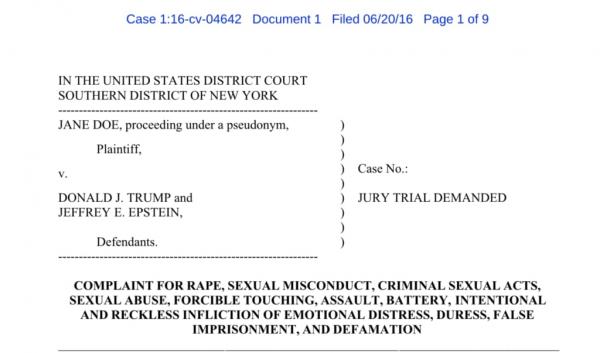 For example, the current US President Donald Trump is accused of rape of a 13-year old girl. Jeffrey Epstein was allegedly assassinated by Trump to wipe off any human witness involved in the conduct. He is also charged with child molestation case; revealing photos of young girls sitting on his laps, Trump trying to kiss them forcefully, and many more.

We have compiled a list of people who were exposed by Anonymous, and for what they were exposed! Their degree of involvement is made even clearer by the released ‘Documents’ by Anonymous.

Well, I’m waiting for #anonymous to do this with Trump. pic.twitter.com/1Y00gbYKEH

#Anonymous out here laying waste to what is POTUS!! I saw mention of Trump in Ep01 of that Epstein doc and wow, @netflix was bought for keeping that shit out too, by the looks of it pic.twitter.com/yCpO8SH7DA