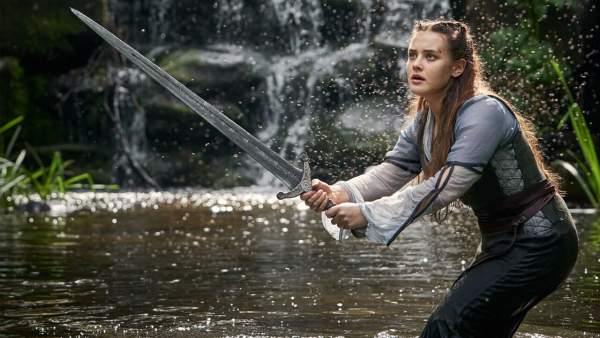 Cursed Season 1: The American drama web series is all set to premiere this summer 2020 which is based on the novel with the same name by Frank Miller and Tom Wheeler. It is one of the original works by Netflix.

In this article, you will get the information about the release date, a glimpse of the story, and the list of cast members.

Currently, Netflix only revealed that we will get the series in the Summer. But the exact date is not available officially. We will update this as soon as the official source makes it public. (Also read: Black Mirror S06 Release Date.)

It is going to be a series of 10 episodes with lots of thrill and drama. The novel by Frank Miller and Tom Wheeler on which it is based is not released yet. So, the exact story is not known. But we can speculate it a little by reading out the description and visuals available.

Let’s see what we are going to get in this series. The description of the show reads,

In this fresh take on the Arthurian legend, teenager Nimue joins forces with mercenary Arthur on a quest to find Merlin and deliver an ancient sword.

As per this, we can say that the series is going to be focused on Arthurian legend, Nimue. Her main goal will be to deliver the ancient sword to Merlin but nobody knows where to find him.

Nimue will join hand in hand with King Arthur and make it a successful mission. So, one thing is clear that we are going to get the ancient kind of society where people use swords and other tools to win the battle.

This show stars Jóhannes Haukur Jóhannesson who also worked in ‘Game of Thrones’, one of the most popular tv series across the globe. It also features ‘Katherine Langford’ from ‘13 Reasons Why‘, Merlin from ‘Vikings‘, and many more.

This means this series going to be an epic of all time. Here is the list of cast members whose roles are confirmed.

However, there are other members in the cast list whose roles are not confirmed. It includes Sabastian Armesto, Shalom Brune-Franklin, Emily Coates, Billy Jenkins, Peter Mullen, Lily Newmark, Daniel Sharman, Catherine Walker, and Adaku Ononogbo.