Derry Girls is a British series created by Lisa McGee. It’s a light-hearted TV series loved by everyone. Its second installment came out in the early part of last year on Channel 4 which is a British network. It was available for audiences outside of the UK on Netflix. It received a lot of love from the audience.

It follows Erin and her friends who grow up around armed officers and go through their life’s highs and lows being a teenager. It was announced that season three will be coming out and that was one good news for its audience. It has been speculated that this may also be the last installment in the series. Let’s get into the details and find out what exactly is happening.

Who is in the cast of Derry Girls season 3?

We will be seeing all our favorite characters coming back like Saoirse Monica Jackson as Erin Quinn, Nicola Coughlan as Clare Devlin, Dylan Llewellyn as James Maguire, Tara Lynne O’Neill as Ma/Mary, Kathy Kiera Clarke as Aunt Sarah, Louisa Harland as Orla McCool and Jamie Lee O’Donnell as Michelle Mallon.

Apart from them, no other name has been mentioned yet. However, writer/creator Lisa McGee has said the upcoming installment will bring new faces. (check: The Politician season 2.)

What is the season 3 plot?

An official synopsis for the show has not been released yet. However, looking at what has happened so far we can expect the group to go through their troubles in the third installment as well. We may see some new obstacles on their way. (check: Netflix’s Ju-On: Origins aka The Grudge Prequel: Release Date, Cast, Trailer, Plot & Everything Else.)

It has also been speculated that this will be the last series, so it looks like we will be seeing some closure in the end if it really is the last segment. We don’t know yet what is going to happen but we will find out soon. Let us know what you think could happen next?

Is there any Derry Girls season 3 trailer?

The trailer for the third season is not out. This installment has only completed half of its shoot. We will only get to see a glimpse of a trailer for the last in the series when the production gets completed. We will have to wait for another few months for that. 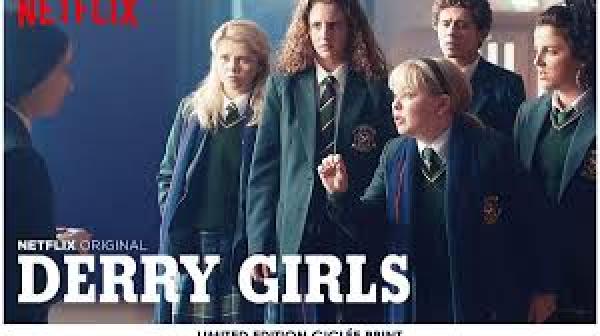 How many episodes are there in season 3?

We have seen six episodes in the first two seasons. The runtime in every installment was around 22-24 minutes. It is likely we will be seeing around six episodes in season three as well and the runtime will be the same as in previous seasons. You can watch the show online on Netflix.

Will there be a Derry Girls season 3? Release Date:

The series third season was supposed to be released this year. However, because of the productions being shut at the moment. There have been delays and this show will be delayed too. We will be seeing this series a little late too. It is expected that this installment will be coming out in 2021. No confirmed date has been given yet.