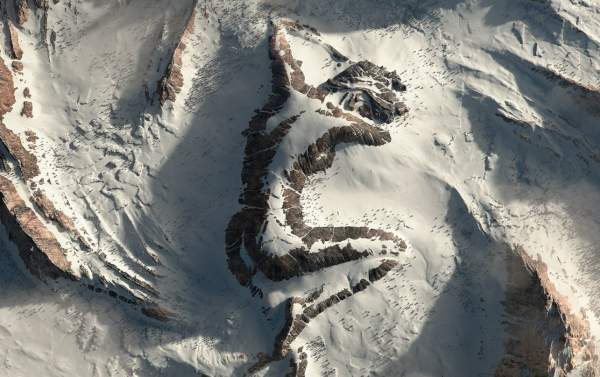 On July 17, a Facebook user shared a photo of Sleeping Lady Mountain with the caption, “Awesome click from Aircraft. Sleeping lady mountain, Alaska”. Now, this picture is all over the social media sites and the micro-blogging site, Twitter. Now, let’s find out whether the claim that it has been shot from an Aircraft is true or not?

Currently, Facebook has found that this claim is false and restricted the reach of the photo on the site. You can have a look at this archive to see what actually the user shared.

Well, on doing image search over the web, it is found that the image has originally been created digitally by Jean Michel Bihorel. The image is available on a social media site, ‘Behance’ where the creator has shared it in the album, ‘Winter Sleep’. He also shared it on YouTube with a short 5 seconds video.

On digging deep more, the same photo had also been shared in Jean Michel’s portfolio. Again, in the portfolio, the image is under the ‘Winter Sleep’ album. There is also one more social media site, ‘Art Station’ where the photo is available with credit to Jean Michel Bihorel.

He is someone who is well known among people sharing an interest in digital creation. Mount Susitna is a popular mountain range of Alaska which is largely known as the Sleeping Lady Mountain. He just created the digital version of the range.

In the end, it is for sure that the claim of ‘Awesome click from Aircraft‘ the Facebook user has done is false.

Is the Sleeping Lady Mountain real?

According to the Wikipedia page of Mount Susitna, the mountain is often referred to as ‘The Sleeping Lady’ is mainly because of its resemblance to a recumbent woman. As of now, the name is thought to originate from the story written by Nancy Lesh which is published in the Alaska Northern Lights magazine.

This magazine was out back in the 1960s and the story follows a woman named Susitna who belongs to giant vows race. She sleeps until her loved ones come back.