The widely acclaimed CBS action-drama series Blood and Treasure was literally a treasure to the eyes to watch. The 2019 series that gained fame for numerous reasons from exploring locations across the globe to the extraordinary star cast, they had it all.

Shortly after the series ended, the series was renewed for season 2 by the end of June 2019. Now there are only a few details about season 2 and a lot of speculation within the audience demographic, we’re going to proffer whatever we have gathered in the time being.

Blood and Treasure Season 2 Release Date: When will the new installment premiere?

Officially, the season was supposed to make its return in May 2020 but since the filming isn’t finished yet, the date is quite dubious. In addition, shooting this series is no child’s play because there are multiple locations involved.

Hence it’s time-consuming and takes a lot of hard work. The second season is also said to deal with diverse locations such as Russia and South East Asia. Hopefully, the series completes filming soon and we get to watch it again in 2021. (Also check: Chief of Staff Season 3 Release Date, Trailer, Cast, Plot And Everything We Know So Far.)

Blood and Treasure Season 2 Plot: What is the storyline?

The action-drama series dictates the life and quests of two completely different characters, Danny and Lexi. Danny McNamara is a former FBI agent who at present works as a lawyer specialized in repatriating stolen art.

On the other hand, Lexi Vaziri is a thief and a con woman who joins forces with Danny to locate and catch a dangerous terrorist- Karim Farouk, who steals treasures and antique art to fund his attacks.

Danny and Lexi, even at disagreeing at moments, work together to reach Farouk after he kidnapped Danny’s mentor Dr. Ana Castillo, an expert on Cleopatra. These events lead both of them to discover that they are now involved in the 2000-year-old ‘cradle of civilization’ and now have to investigate further.

Blood and Treasure Season 2 Cast: Who will be starring?

The cast and crew are the people who bring the story to life, the actors enact and live their characters while the crew does all the work behind the lens. In Blood and Treasure, we have some really great actors who are likely to return to our screens in their respective characters.

As I had informed earlier, we had a limited set of details so far but as soon as we’re updated with new information we’ll be pleased to share along with you. (Also read: Prison School Season 2 Release Date, Cast, Plot and Trailer: Everything We Know So Far About Anime.) 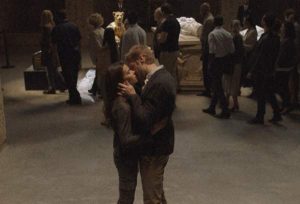 Blood and Treasure Season 2 Trailer: When will the Trailer land?

Right now, season 2 is only halfway completed. The filming had to be halted owing to the Corona Virus pandemic situation. Therefore, there is no information about a trailer landing soon since the shoot isn’t complete yet.

It’s been months since the disease arrived that shook the whole world and devastated economies. There lies a possibility of the filming restrictions ending soon for films and series getting back to the production by following safety guidelines.

Well, Matthew Federman, one of the executive producers said with a tweet, “We’ll get back to shooting and finish the season when it’s deemed safe. No air date yet. Will let you know when we have one officially.”