‘Locke and Key’ is a fantasy drama that was released in 2020, based on a comic book written by Joe Hill and Rodriguez. The show follows the Locke family who moves to Matheson after the murder of their beloved family member.

The show concluded in February 2020. Later in March, it was announced that the show was coming back with another installment, isn’t that exciting? Let’s get into details and find out what is in store for us.

After the murder of her husband, Nina Locke along with her kids moved to their lineal family home in Matheson, Massachusetts. The kids find magical keys in their new home and soon become the keepers of the key.

They learn that the keys may be related to their father’s death. A demon gets through when they use the Omega key to open the black door. After trials and errors, the kids defeat Dodge. But, later they find out that Dodge is still alive.

Dodge uses the Identity Key to turn Ellie into Dodge. Unaware that Ellie now looks like Dodge, her friends throw her into the Black Door. Meanwhile, a demon possesses Eden.

‘Locke and Key’ Season 2 Plot: What will happen next?

By the looks of how season one ended, next outing will likely focus on the kids discovering that Ellie was thrown into the black door and not Dodge. We will get to know more about the history of the keys.

Tyler is going to turn eighteen which means he will start forgetting about the magic. Since Kinsley and Tyler are so close it will be interesting to see how it affects them.

In the Comic, it was seen that the soldiers from the war had found the Black door, which happened to be a portal to another world. Using that door, the demons entered this world. 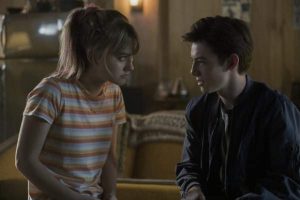 However, while entering they turned it into a metal form. The soldiers used the same metal to create magical keys. As we have seen that the show is different from the comic, we might see changes in season two as well.

It will likely explore the part where the kids understand the responsibility that comes along with the keys. It is going to get challenging, scarier, and darker in the future. It is going to be exciting to see what happens next.

(Also check: ‘Legacies’ Season 3 Release Date, Trailer, Cast, Plot: When will we get the pending episodes and the upcoming outing?.)

‘Locke and Key’ Season 2 Release Date: Is it renewed? When will the new series premiere?

As of now only the renewal of the show has been announced. Most of the shows on Netflix come back after a year of its previous season. Statistically, if that happens we may see the show in early 2021.

However, since the productions have been shut worldwide, it is likely going to affect the release of the second season. So probably the show will be out after mid-2021.

Since the production of the show has not begun, the trailer will not come until 2021. Although, you can watch the trailer for season one below.

‘Locke and Key’ Season 2 Episodes: How many episodes will be there?

‘LaK’ Season 2 Cast: Who will be starring?

Looking at the end of season one we are guessing we will see Jackson Robert Scott as Bode Locke, Connor Jessup as Tyler Locke, Emilia Jones as Kinsey Locke, Sherri Saum as Ellie Whedon, Griffin Gluck as Gabe, Darby Stanchfield as Nina Locke and Laysla De Oliveira as Dodge.

However, Netflix has not revealed any details on who will be starring in the second outing of ‘Locke and Key’. Let us know who do you want to see in season two?