The Courier Daily News
Home Entertainment ‘The Good Place’ Season 5: Why do we not get another season? 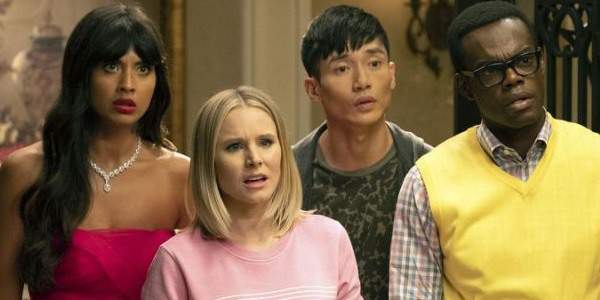 ‘The Good Place’ is a heaven-like afterlife where people with exclusive morality scores are permitted. Post her death, Eleanor arrives at heaven and soon discovers that she’s been mistaken for someone else.

In order to live a happy afterlife, she hides her true identity and tries to become more moral and decent. There she meets with more people like herself: Chidi, Tahani, Janet, and Jason. All of them shortly learn that this afterlife is ‘The Bad Place’ rather than ‘The Good Place’.

Events follow the team to be sent back on earth with wiped out memories where they discover that people haven’t left to heaven in centuries and therefore they help people to become more aware and moral.

After the show took its last and final breath with a pleasant ending on January 30, 2020, on NBC and Netflix, there were speculations arising if the creators decided to renew the show.

To cut the long story short, there won’t be a fifth season of the series. One of the most loved shows said their final good-bye. Let us see why and all other juicy details of what would have happened if the show continued.

Why do we not get ‘The Good Place’ season 5?

The creator of the series, Michael Schur publicized in June 2019 that the fourth season will be the final and a “wrap up”. He posted on Twitter saying,

After The Good Place was picked up for Season 2, the writing staff and I began to map out, as best we could, the trajectory of the show … I began to feel like four seasons – just over 50 episodes – was the right lifespan.

He further admitted of being “tempted” to go beyond four seasons for a couple of years but cannot since that is the correct and fulfilling end to the show.

Some series continue for years and then comes a point where the tale has to be dragged other than savored. On that account, it is better to end a series because then neither the rating goes low nor the viewership.

The apparent theories of “What ifs?” and “What not?” if there was a Season 5?

Since the series ended with all the four characters living in heaven and finally disappearing through the door. It wasn’t impossible to revive the characters for another task. Another solution could be to get an entirely new star cast with a new unknown mission in their sling.

However, the creators of the show instead decided to pull the plug of the show because of the pre-planned ending. So, even though we’re emotional to let go of the show that has been dear to us since 2016. We will have to because that is how it is supposed to be.

And when we miss “Team Cockroach” on our television screens, you could switch your Smart TVs into Netflix stations and binge-watch it from the top. That way you will live their memories again.